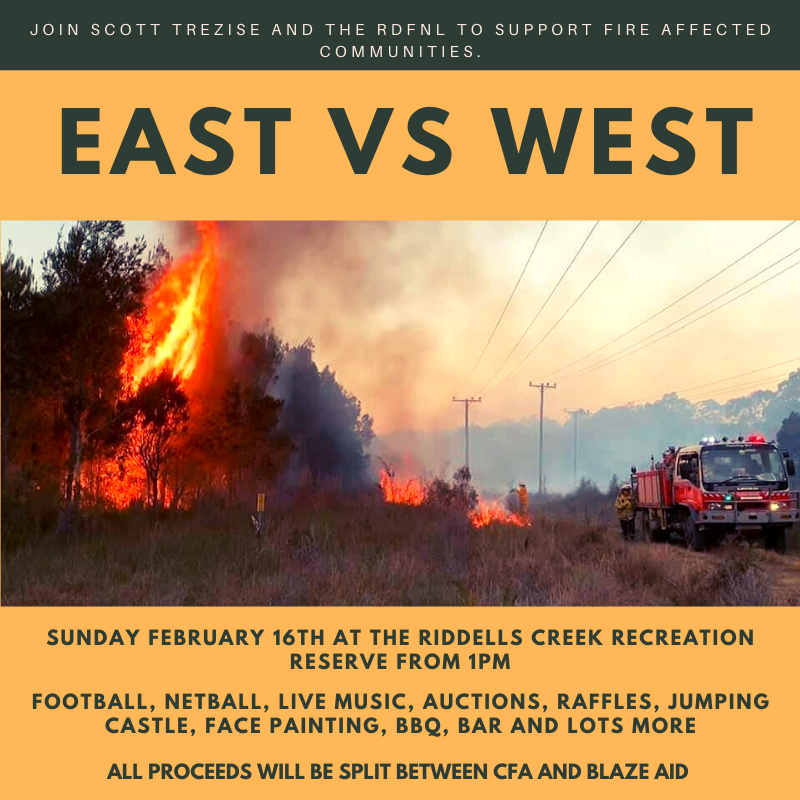 The Ontime Delivery Solutions RDFNL will join forces with Scott Trezise to benefit Blaze Aid and CFA with a charity match.

Like the rest of the Community, the RDFNL Board is shocked at the destruction facing Australia with the current fires and drought conditions.

The RDFNL and Scott came together and discussed what could be done to offer support and make a difference.

The RDFNL is proud to work with the well-known Riddells Creek identity, who has a history of initiating Community focussed events with great success.

East teams will include Riddell, Wallan, Romsey, Lancefield and Woodend Hesket and will be coached by Anthony Power.

Anthony is a long serving member of the RDFNL community having coached and played at several clubs over a long period of time.

The West team will be led by Damian Houlihan.

Damian is an ex AFL footballer who was drafted to Collingwood and North Melbourne and in his first ever senior game, his first three kicks produced three goals.

Both coaches jumped at the opportunity to be involved in the event.

Netball coaches are still to be confirmed by the RDFNL Netball Directors and will hopefully be announced in the coming days.

As a great show of solidarity, all Clubs will be represented in what we anticipate to be a great showcase of talent and sportsmanship across both football and netball.

There will be live music, auctions, raffles, jumping castle, face painting, BBQ, Bar and lots more on the day.

Join the RDFNL on Sunday February 16th at the Riddells Creek Recreation Reserve from 1pm to support the cause.

Members of the CFA will be doing a lap around the ground before the game and half time, where any person wishing to donate can throw gold coins or any money into a blanket.

All proceeds will be split between CFA and Blaze Aid.